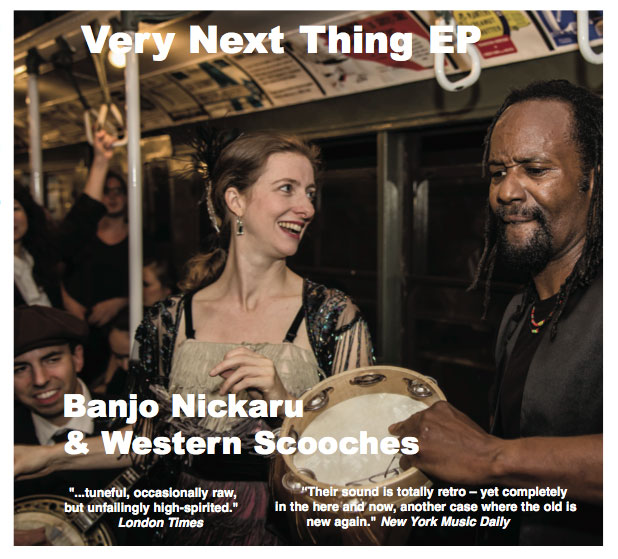 Betina and I released Hot Jazz Jumpers’ The Very Next Thing album November 2015 and were thrilled that it was very well received in the jazz world. A week after it’s release, I played at NERFA (Northeast Regional Folk Alliance) as a sideman with violinist/vocalist, Efrat Shapira and was so inspired meeting and playing with great musicians such as David Amram, Michael Ronstadt and others from the folk community. I’m naturally comfortable improvising, recording, play- ing live, composing and writing sponta- neously, playing off the musicians, the audience, the room and energy around me.

These experiences inspired me to release a version of The Very Next Thing as a folk album. We had some feedback that tracks such as Freight Train, Jock-a- mo and You Are My Sunshine (with voice, guitar, resonator/slide, banjo, harmonica, spoons, drums and bass) would also be well received in the folk world. Our other touring group Banjo Nickaru and Western Scooches performs the type of songs we pulled for this EP. Betina wanted to include our 2007 unreleased originals and we felt that the tune we wrote for our wed- ding, “I’m Gettin’ Married” and the song Betina wrote for me when we first met, “I Don’t Believe In Love” would be fun additions! Being primarily a guitarist/tenor banjoist, I actually learned 5 string banjo for “I’m Gettin’ Married” and had to really shed for the recording and our wedding! After toying around with song order, we scheduled one editing session at Soundtronics with my cousin Len Monachello and this 10 song EP was born!

×
Update Required To play the media you will need to either update your browser to a recent version or update your Flash plugin.

This highly listenable recording reminds us that at it’s root, Jazz music is Folk music with all the immediacy and relevance that music of, for and by the people has always had and always will. Nick Russo’s banjo playing is especially compelling.
Lindsey Horner