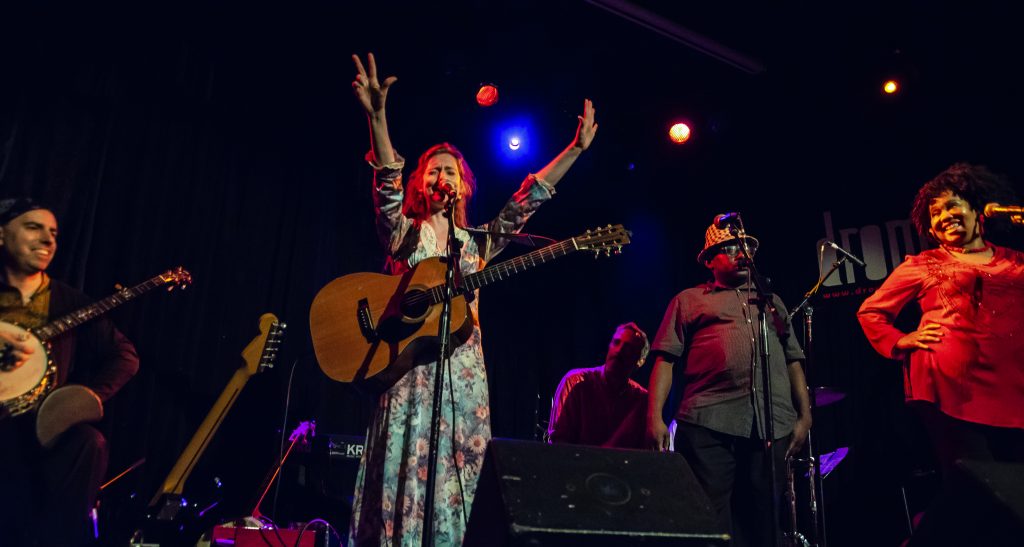 “Banjo Nickaru & Western Scooches brings Cajun Jazz, Blues, Gospel, and Americana roots together in a way that inspires an emotional reaction. I’ve seen a million live shows, and Banjo Nickaru is one of the best live acts I’ve ever seen; up there with early Springsteen, early Counting Crows, and Langhorne Slim.” – industry veteran Pat O’Connor.

“I’m so impressed! They really took it to another level. Live these guys are extraordinary. It’s just magical, the proficiency and the expertise. Getting up on stage with them at the end for that Finale was like going to church! It was pretty cool!” – Rob Morrow, Emmy/Golden Globe nominated actor, and opening act.

“Banjo Nickaru & Western Scooches are a refreshing celebration of music, culture and artistic expression, a soul-replenishing revival that will boldly carry us out of Fearland and into heaven.” – Rob Evanoff

“The energy in the room, playing with almost every single musician who recorded on the album with us, this was something powerful for me. The opening acts really added to the warmth and thrill of the evening, and so did our friends in the audience, both old and newly formed, right then and there. I could feel their support. Whew! What a night!” – Betina Hershey, songwriter and singer

Celebrating their new album “Get Us Out of Fearland” which No Depression dubbed, “Americana music at its purest and most impressive,” this was the first time all of the musicians on the album had a chance to gather together, their combined energy and styles creating unique moments for each song. The show started with singer Betina Hershey, banjoist Nick Russo, and percussionist David Pleasant playing acoustically through the audience and onto the stage with a song reminiscent of the 1920s and New Orleans.

Other unique moments included the power of “Dandelion,” with Hershey’s soaring vocals and the aching and celebratory gospel vocals of Stephanie Rice and Miles Griffith singing “break down that wall!” “Run,” dedicated to victims of gun violence, featured the core duo with Hershey’s light fingerpicking and Russo’s banjo played as a drum. The band’s rollicking rendition of “A Hundred Miles,” a train tune from the 1800s, featured fiddle veteran Kenny Kosek. Closing the show, Banjo Nickaru & Western Scooches brought up everyone from the entire night, along with special guests, for their sing-a-long “Park Song” and “This Little Light Of Mine” with David Pleasant’s Gullah-Geechee rhythms and shouts rising above.

Opening acts included singer-songwriter Devon, accompanied by her brother Christian, a warm pair, who previewed songs from her forthcoming EP, Songs From The Back of A Bar, followed by Morrow, who treated the appreciative audience to a half dozen songs, including his new single, “The New, New Face” before asking Russo to join him on a spirited take of Bruce Springsteen’s “Dancing in the Dark.”

View all posts by BNAdmin →